The intelligentsia of the retail real estate crowd congregated in Toronto last Thursday to talk property management and disruptors.

The fourteenth annual RealREIT conference dove headfirst into its retail focus, and the spate of grim prognoses the media’s been assigning the scene of late.

OneREIT CEO Richard Michaeloff was succinct in his efforts to put the hysteria in perspective. “Retail,” he said, “has always had turmoil. . . . The key thing is for landlords and property owners to stay focused, be adaptable and recognize trends.”

Among the forces vying for their focus, find the aggressive encroachment of technology and ecommerce.

Ken Silver, CEO of CT REIT, told the crowd that retail success boils down to a commitment to the stuff. The retailers that are investing in technology—not just in support of their website and e-commerce efforts, but in every move they make—will always be the victors, he said.

And for the retailers not among this laureled crew, the fallout of addressing the space they abandon falls to the property owners. Not surprisingly, the conference made room here for a lively discussion about the legacy of Target—which left 16 million square feet of unoccupied Canadian retail space in its wake.

Clever managers, conference participants concurred, can make a virtue of such failures by turning them into opportunities. One third of the old Zellers stores are now Planet Fitness centres.

The conference also dipped into comparative analysis, and the consensus was that the differences that distinguish the American and Canadian markets are significant.

For one, the population split means there’s about 25 square feet of retail space per capita in the US, versus just 15 square feet per capita in Canada. That, commented Don Clow, president and CEO of Crombie REIT, means “there is a bit of a cushion.”

For another, there’s the vacancy rates in the two countries’ major shopping centres: below five percent in Canada, almost eight percent south of the border.

“The bottom line is we do have reasonable level of occupancy in this country,” Clow told the group.

“You just need to be working with your retailers to adapt very quickly and make your centres successful through that accelerated change.” 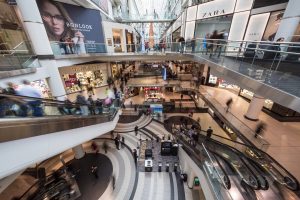