Why Online Companies Are Expanding To Bricks & Mortar?

Why Online Companies Are Expanding To Bricks & Mortar?

WHAT’S TRIGGERING THE CHANGE AND HOW YOU CAN USE THEIR POWER-PLAYS TO CREATE YOUR OWN WINNING HAND.

It’s clear that the lines between online and offline retailing continue to blur. After all, the retail landscape and the ongoing ‘bricks and mortar’ stores vs. online retailing fight is ever present. And yet, amongst all the industry strife smart retailers are building their online and offline brands on the fact that customers should always be left with a unified brand impression, always arriving at the same outcome, emotion, and result. So despite the challenges that all retailers face, which the media seems to perpetuate with headlines alluding to a ‘retail apocalypse’ or ‘death of the mall’, the apparent glut of real estate on the market is leaving property owners and many retailers optimistic about the new approach to business.

In the same way that not all online businesses operate on the same model, not all businesses follow the traditional trajectory of moving from bricks and mortar to online. More and more, online-built and scalable businesses are transitioning the other way by establishing and increasing their bricks and mortar footprint. Always mindful, of course, of the brand they’re building and the customer experience they’re striving to translate that into a physical experience.

Looking at these power-players’ power plays, see many commonalities given the fact that online-first brands are by their nature profoundly digitally-native. “They’re vertically integrated, meaning that they totally understand their entire supply chain and they’re selling their own goods,” explains Art Coppola, CEO of the REIT, Macerich in the U.S. “They all want to have stores. Having stores is not an appendage. It is the core [of] their strategy.”

So, with real-estate experts calling for an increased number of brands to expand online to offline (calling for online brands like Away for luggage, Outdoor Voices for athletic apparel, M.Gemi for Italian leather shoes, Everlane for apparel and accessories, Harry’s for razors, Untuckit for button-down shirts, Allbirds for tennis shoes, Boll & Branch for bedding), it’s worth examining what makes the hits and how near-misses happen.

It might seem that Apple stores have always been with us, but they shocked the market by announcing the opening of 25 retail locations in the U.S. in May of 2001. Headlines stopped short of calling CEO Steve Jobs crazy, saying he was bold; anything but boring in a climate of Gateway tech store closings, a marked retail slowdown and the PC market bottoming out. One Bear Stearns analyst said, “We can’t figure it out… I’m sure [the computer retail store model] can work, but it hasn’t so far.”

Jobs announced that “Apple stores [would] offer an amazing new way to buy a computer.” Knowledgeable salespeople demonstrated Macs® running innovative applications like iTunes and iMovie™, as well as Apple’s revolutionary new operating system. All of the Macs were connected to the Internet, and several were connected to digital lifestyle products that complimented the Mac experience.

Apple delivered the touch in a high-touch world.

NOT ALL GIANTS ARE EQUAL: Amazon

One of the world’s largest retailers – the company that tries to be everything to everyone – has attempted to make inroads as an offline retailer (since early 2015), but the glowing successes have not materialized quite as planned. Amazon has done the slow-march towards modest offline locations that are still worth looking at:

As a data behemoth, Amazon certainly has the ability to create partnerships and initiatives, leveraging that collaboration and access to large-scale data assets to remain competitive. This is becoming increasingly important for brands and retailers moving in both directions across the blurring lines (ie – Walmart moving online; Amazon moving offline).

But Amazon’s innovation in non-stickered product (allowing pricing changes on the fly based on consumers previous spending habits) or cashier-less outlets (requiring a plethora of cameras like a giant surveillance device) is still being questioned in 2018 as gimmick or future.

Impressive, yes, but does that spell success? The jury’s out.

With a mission to educate savers and facilitate co-working, market observers called ING Directs’ expansion a ‘joke’ saying, it’s a bank in café clothing. Let’s take a quick look at where this bank without branches came from and where they went as they opened branches that are coffee shops:

By focusing the concept on a core idea: ‘saving money should be as simple as having a cup of coffee’ then throwing in lounge chairs, communal tables, power outlets and video tellers, ING Direct succeeded through open spaces creating comfort. Around the time the Canadian division became Tangerine (ING DIRECT was sold to Scotiabank and rebranded), the U.S. division was purchased by Capital One (a publically-traded company, accountable to shareholders) who pursued opening a dozen new locations within the year. They obviously looked at data and deemed it profitable.

BACKGROUNDER: ING Direct founder, Arkadi Kuhlmann tells the story of so many people showing up at their first Gordon Baker site to verify ING’s existence that staff offered them coffee and they lingered. This sparked the idea to encourage that elusive quality of connection/community that can create a brand’s lifestyle experience.

HOW LITTLE GUYS GET TO BE BIG GUYS (fast!)

Casper Mattress Canada
The journey from online to offline shot like a rocket across the retail sky for Casper Mattress, but a very controlled rocket at that:

Warby Parker
Online eyeglass retailer Warby Parker was founded in 2010 on the basis of shipped-to-home, custom-made glasses to great success, but similar to Casper plans to have nearly 100 stores across the U.S. by end of 2018 (up from present 64 locations). Their groundbreaking business followed their customers through their money and their data:

FOOD FOR THOUGHT: The idea of using pop-up trailers as test sites instead of/before committing to long-term leases as part of growing process; at special events, temporary ‘under construction’ replacements, or travelling stores allows for flexibility at all ‘bricks and mortar’ retails.

Frank + Oak
Six years has seen this Montreal-based online menswear retailer flourish in the U.S. as well as in Canada, running a website and app, operating 16 bricks-and-mortar stores with in-store barbershops and cafés, brand outposts less concerned with sales per square foot than hosting whisky tastings and promoting the Frank + Oak aesthetic. And here’s how they did it: 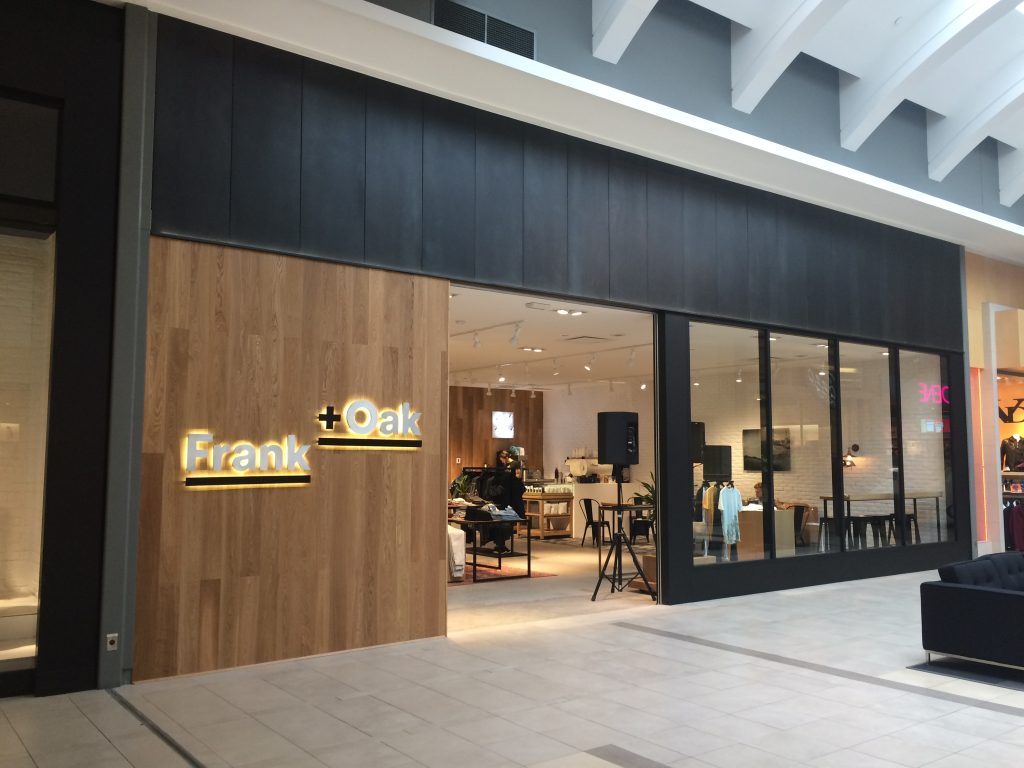 BACKGROUNDER: It’s invaluable to partner with suppliers, as Frank + Oak did with us after their first few stores, who can help implement growth plans, modulate efficient spend through standardizing, and create the customized identity for your unique brand.

DON’T LIKE THE LANDSCAPE… CHANGE IT
“When we were first talking to potential landlords, there was a lot of skepticism that they didn’t want mattress stores in the mall,” Krim of Casper said. “Now the landlords see what the experience is about, and it brings a lot to their properties.”

Many of these retail brands today are also much more flexible in the size of their stores, circumventing a precedent set by department stores ages ago, to develop one model — one-floor plan — and stick with it.

Instead, companies today aren’t afraid to start small and move around. No more expensive, long-term leases to burden young brands, making life difficult at start-up. It’s a world of pop-ups and short-term, low-risk leases, all opening doors to the growth of an offline presence.

KNOW YOUR CUSTOMER AND MEET THEM WHERE THEY ARE
A Fall 2017 study surveyed 504 CMOs, heads of marketing, and other senior marketing executives of retailers and brands. A majority (67%) confirmed “the value they can offer customers” to be a top marketing driver for their business and most understood that data is key. Non-personally identifiable customer data enables them to deliver greater customer satisfaction.

Online retailers and brands with access to large amounts of customer data across different channels and stages of the buyer journey are better positioned to dominate in commerce marketing. It seems that personalization wins in an era of saturation. And advantage goes to the online startups since conventional bricks & mortar retailers won’t have the same data-perks without conducting a lot of customer surveys.

TECH TRANSFORMS
Take Ethan Song of Frank + Oak, who believes the future lies in artificial intelligence — machine learning that can look at a customer’s online profile and understand whether he is the sort of person who needs two new white dress shirts for work, plus a Raptors-logoed jersey. “Software is going to transform every type of experience,” he explains. “There’s still a big space for physical shopping streets and malls.”

Therein rests the massive transformation possible in retail as lines fade between online and offline markets.

Thinking of making the move from online to offline? Need help in navigating the look that will be right for you? Then we need to talk.